Big thanks to the employees of ChemTrack- who participated and allowed us to be recognized as one of the Best Workplaces in Alaska!

Best Workplaces Alaska allows organizations an opportunity to highlight their people-centered culture and a chance to celebrate the good!

A company filled with happy, productive employees is one of the best testimonials a company can earn.

Alaska Journal of Commerce and Peak 2 Peak Events have partnered to determine the top workplaces in Alaska based on employee feedback. 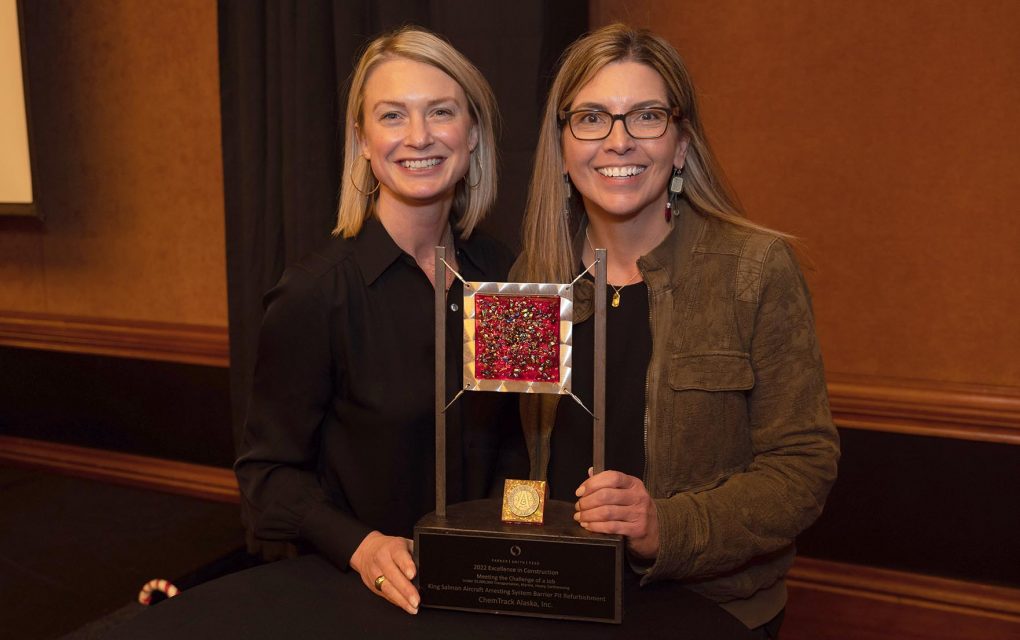 The 2022 Associated General Contractors of Alaska Excellence in Construction Awards were announced on Friday, November 11, 2022.

A HUGE THANKS to all of our team who made this project a success!

The final site construction sequence included a planned 65-hour closure event for the airport and included placement of 16 Arrestor Cable Hold Downs into the airstrip surface. ChemTrack worked simultaneously at both ends of the runway to sawcut asphalt, augur and remove soil, install rebar cages, place concrete, install hold down bolts, hand trowel to 1/8 inch below grade, and cover with blankets for curing.

Despite the many project challenges, ChemTrack safely refurbished the King Salmon AAS without impeding the busy air traffic of this regional hub and fishing mecca.

The Parker, Smith & Feek Excellence in Construction Awards are given in recognition of exceptional projects. Companies are judged against the others in its category by independent industry professionals.

Artificial stone made of a mixture of cement, aggregate (hard material), and water. In addition to its potential for immense compressive strength and its ability, when poured, to adapt to virtually any form, concrete is fire-resistant and has become one of the most common building materials in the world. The binder usually used today is portland cement. The aggregate is usually sand and gravel. Additives called admixtures may be used to accelerate the curing (hardening) process in low temperature conditions. Other admixtures trap air in the concrete or slow shrinkage and increase strength.

Steel frame usually refers to a building technique with a “skeleton frame” of vertical steel columns and horizontal I-beams, constructed in a rectangular grid to support the floors, roof and walls of a building which are attached to the frame.  The development of this technique made the construction of the skyscraper possible.

Remediation – Cleanup or other methods used to remove or contain a toxic spill or hazardous materials from a site. Stabilization – Conversion of the active organic matter in sludge into inert, harmless material.

Helical piles are ideal in areas of limited access, such as areas with low overhead or width restrictions.  Installation is unaffected by weather or high water table.  No vibration during installation means no damage to sensitive structures or instrumentation in the construction zone. The term Helical Piers, Screw Piles and Helical Piles are all used interchangeably.

Biosurfactants are surface-active substances synthesized by living cells. They have the properties of reducing surface tension, stabilizing emulsions, promoting foaming and are generally non-toxic and biodegradable. Biosurfactants enhance the emulsification of hydrocarbons, have the potential to solubilize hydrocarbon contaminants and increase their availability for microbial degradation. The use of chemicals for the treatment of a hydrocarbon polluted site may contaminate the environment with their by-products, whereas biosurfactant treatment may efficiently destroy pollutants, while being biodegradable themselves.

Hazardous materials are solids, liquids, or gases that can harm people, other living organisms, property, or the environment.
Field Testing is an experiment, research, or trial conducted under actual use conditions, instead of under controlled conditions in a laboratory.

Completely tearing down buildings, razing them to the ground and removing the debris to a landfill or waste treatment facility.

Procedures to control fiber release from asbestos-containing materials in a building or to remove them entirely, including removal, encapsulation, repair, enclosure, encasement, and operations and maintenance programs.

The term heavy metal refers to a group of toxic metals including arsenic, chromium, copper, lead, mercury, silver, and zinc. Heavy metals often are present at industrial sites at which operations have included battery recycling and metal plating.

The Resource Conservation and Recovery Act, or RCRA, is a law that addresses the safe and environmentally responsible management of hazardous waste in the United States. The Environmental Protection Agency (EPA), which oversees RCRA compliance, defines waste as hazardous if it meets certain criteria. To qualify as hazardous or RCRA waste, a substance must first be a solid waste. It must then fit the EPA’s definition of a “listed” or “characteristic” waste. Stabilization – Conversion of the active organic matter in sludge into inert, harmless material.

In-Situ – In its original place; unmoved unexcavated; remaining at the site or in the subsurface.

Technology that oxidizes contaminants dissolved in ground water, converting them into insoluble compounds.